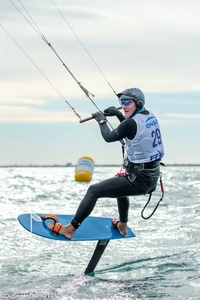 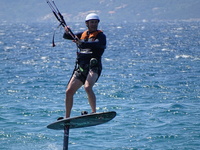 Extraits sur la partie foil (mais j ai du supprimer les images et videos, sans aile PL arc malheureusement:
"But I am guilty as charged for failing to recognise, back in the 1980's when it actually happened (with origins even earlier), the technological breakthrough that is now sweeping through kite surfing.
I'm referring to foilboarding; kite boards with hydrofoils mounted on an extended central fin which enable skilled users to travel above the waves in eerie silence at high speed, on every course, with superb control.
Although still limited by wave height (a fair proxy for wind strength except in very sheltered locations) and not easy to do well, de-power 'foil kites and foilboards have delivered a combination that is basically unbeatable around typical sailing courses by any other small sailing craft. Skiffs (like the very fast Olympic 49ers), catamarans, windsurfers, even the highly developed hydrofoil Moths (a dinghy class) are now being trumped by the best kite foilboarders.
For a peek at foilboarding state of the art, (not all kite powered) have a look at;

Astonishing!
And what is most astonishing to many viewers of these, is the segment showing a surfer using a foil board to ride minor ocean swells. He can be seen riding one of these few hundred millimetre high bumps-on-the-water for a distance then using momentum (and sometimes pumping) to cut back up to the next one. This is the hydrodynamic equivalent of how Albatrosses slope soar on ocean waves, building enough velocity to loop upwind to the next, in a sequence which enables them to fly into the wind without ever flapping their wings. From this it can be deduced that it will be possible for a competent foilboarder to cross oceans just by surfing oceans swells - and to do so even in the direction the swells are coming from. Wow!

So, where did this world changing technology come from - and when?

About now I need to explain (confess) to some history- and not, I hasten to add, for any contribution to foilboard development (PL Kites did make a kite board called a "foilboard" in the late 1990's, but it was foil assisted rather than a full foil rider).
From 1987 until about 2005 I pretty much dedicated every spare hour and every spare dollar (plus some of both that weren't spare), to kite sailing. I didn't have a specific goal in mind, anything from small and minimalist through to huge and complicated would have been quite acceptable, providing it could carve out a niche against existing sailing craft. I made 100s of prototypes and tried almost every conceivable approach, with help and support from everyone and anyone who was willing. Didn't succeed but, not commercially anyway, though along the way I did (almost accidentally) get kite buggying going, and made some contributions to the development of "classical" kite surfing, and developed kite powered boats (the buggy boat in particular) that were successful in every way except by sales.


Kiteboard History On The Fence.
But amongst the very many different approaches that I either tried or considered were foilboards.
They're not a new thing, have been around since at least the 1960's for water skiing:(In 1975, Dynaflite reported that: "stand-up foils were popular in the 1960s"). During the 1990's and before classical kitesurfing established, I'd even built a foilboard for a local water skier who had seen the then popular sit-down "Air Chair" in use. And they had been used with kites well before then; there's a video around of Cory Roeseler "doing ~30 in ~10 kts of wind, in 1989" with his "KiteSki" delta form power kite system and a foilboard.
But I didn't recognise the future, even when it was right in my face- and neither did anyone else.
Personally I have an excuse; a character flaw which causes me to regard incremental development as boring and to be avoided when possible, in favour of the never ending search for a big new idea.
And I thought the stand-up foil board approach would never work because the level of balance and skill required put it beyond any but a few talented individuals in smooth conditions for a few wobbly meters.
Which is what everyone else had similarly concluded I think.


But what none of us factored in was the ratchet process by which developments like this progress. To begin with, the equipment is barely functional and nobody has the skills to use it anyway. Then, in a sort of feedback effect; the gear improves and skills improve. This is an uncertain and intermittent process, made even more drawn out in the case of kite foilboarding by having to wait for efficient de-powerable kites as well. Until de-power ram air kites, developed for buggying and snow kiting, came into kitesurfing 5 or 6 years ago (to squeals of outrage and protectionist responses from traditional tube kite makers and users), kite foilboarding was just an uncompetitive curiosity.
Even now, kite foilboarding requires a level of skill that can only be attained by those with both talent and determination. Chris Brent, a keen and skilled (classical) kitesurfer who worked for PL Kites as an Arc kite designer through the exciting early years of this millennium, later shifted to California and took up kite foilboarding in 2013. Chris says: "When I learnt to foil I was pretty sure there was something wrong with mine. If there hadn't been ten or fifteen other people cruising around me at Crissy I would have said it was not possible and thrown it away. Maybe that's why it didn't happen sooner?"

But in 10 more years, who knows, kite foilboarding may be as easy as riding a bicycle- or at least a unicycle.
" 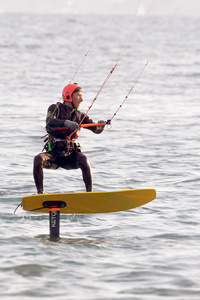 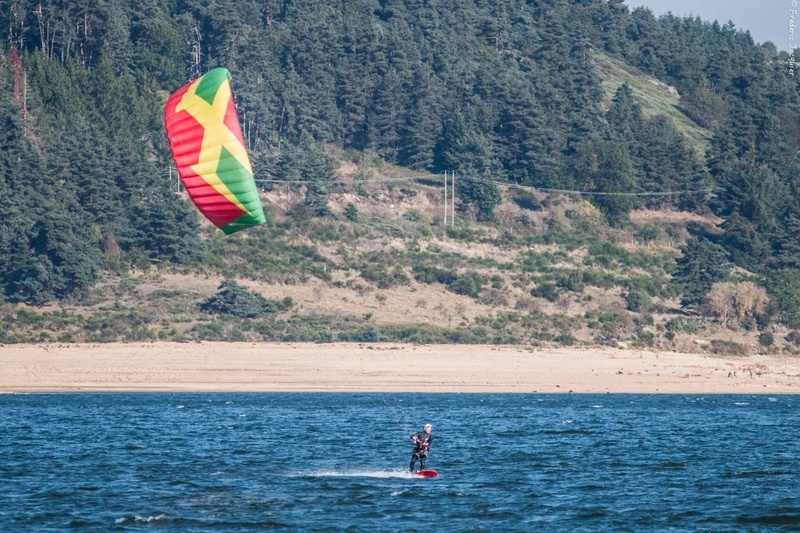 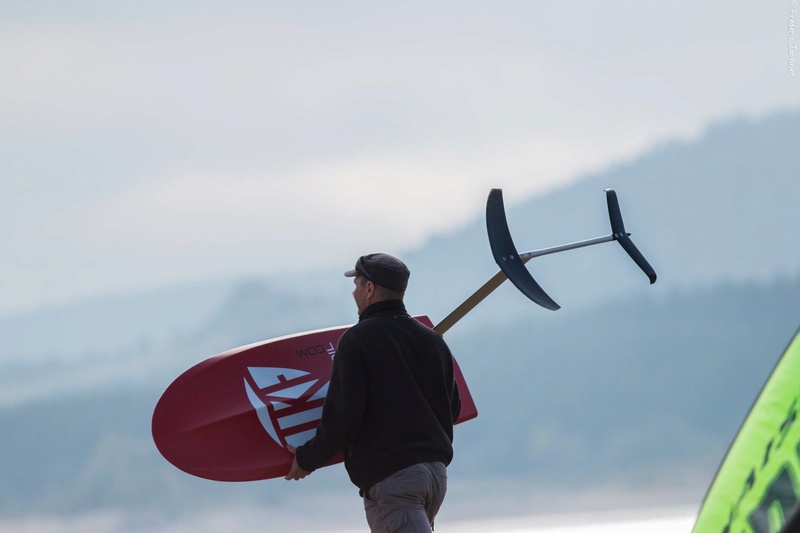